It is with interest to read this description of someone who always struggled with being a support to others during shiva (Jewish mourning period for the first week after burial of a loved one) and then had to face being the recipient of support during his time of mourning.

My wife lovingly refers to me as a shiva wimp.

I would use any excuse to avoid making the traditional visit to the home of one in mourning for a close relative. “We weren’t that close. I don’t want to burden them with conversation. There will be a lot of other people there.”

Until several weeks ago, my life had been graced with extra doses of life. Four parents well into their 80’s, six kids and four grandkids. I didn’t want to jinx anything.

All that changed on erev Rosh Hashana. My father, after catching a few fish on the boat with my mother, said he had a headache. A few hours later he was gone.

Shiva came crashing down on the shiva wimp.

The seven days are now long over, but I am still mourning. Words seem to disappear in the air before they reach my ears. I am constantly saying, “What, can you say that again? I didn’t catch it.” I stare out the window, not knowing what I am looking at or looking for. The stickiness of death has not yet departed.

Because my parents lived in the outskirts of Maine, not many people actually visited during the shiva. But hundreds called or wrote. Every Facebook message brought home to me how I had let down other people during their time of mourning; how I had not risen to the occasion to comfort them in their brokenness.

During my shiva, I was overwhelmed by people’s goodness. Thank God, other people were not like me. While I deeply appreciated the time and effort everyone extended to me – some things helped me and some – not so much.

One well-meaning person said, “I am calling to fulfill the mitzvah of comforting mourners.” Ugh. It wasn’t so comforting to become the object of his mitzvah observance. Similarly, many people recited the formulaic Jewish response of “Baruch Dayan HaEmet” or “HaMakom yinachem.” Often I felt they were functioning out of religious obligation. The tone and pace of their speaking changed during their recitation, as if they had moved into a formal and mechanical zone. As they spoke, I seemed to disappear.

Some people offered unsolicited advice – “Remember the good times. Be thankful he didn’t suffer. Time will heal the pain.” I wasn’t ready for it and couldn’t hear it. I felt they were trying to make the tragedy easier for themselves, not for me.

But some people held the space of my brokenness, without trying to “fix” things. As if they put out their hands to hold my tears. People that I didn’t even know well offered me a quiet space to dwell. I greatly appreciated their being with me.

The most comforting and healing for me were the people who shared their own pain with the death of their parent. They spoke from their hearts about how they are still dealing with their loss. In their pain we bonded and together we shared our brokenness. They did not try to do a mitzvah, to recite standard words, or to offer advice. They had the courage to revisit their own period of mourning and honor my grieving with their grief.

They are my shiva heroes. They graced me with the sorrow of their heartbrokenness. I sat in awe and remain grateful for their courage and authenticity.

I hope that I will be able to follow their example and serve as a comfort to others in their time of mourning.

Here is a perspective on the death and mourning from the seventh Rebbe of Chabad, R. Menachem Mendel Schneerson, o.b.m. 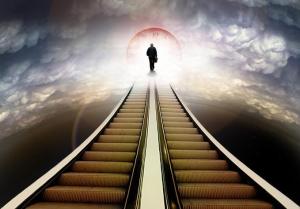 On Death and Mourning  from a letter of the Lubavitcher Rebbe, Erev Rosh Chodesh Kislev, 5738 [1977]

It is surely unnecessary to remind you that the soul is eternal, and, moreover, its survival after the death of the body is not something that has to be believed, but is plain common sense. For, obviously, physical illness that affects the body cannot affect the soul which is spiritual; it can only affect and terminate the union of body and soul, but not the soul itself.

The above would be superfluous to mention to you, except that it has a direct consequence and bearing on what should be your attitude and conduct. For, inasmuch as the soul is eternal and, indeed, is now in a state where it is not limited by the body’s limitations, it is fully aware of what is happening in the family. When it sees that it is the cause of grief over and beyond the bounds of mourning set by the Torah, Toras Chaim [the Torah of Life] – it is obviously distressed by it, and this is no way of contributing to the soul’s peace and blissfulness.

I have also had occasion to mention that even during the soul’s sojourn in this life when clothed in a physical body, the real bond between people and members of a family is not a physical one but a spiritual one, for what makes the real person is not his flesh and bones, but his character and spiritual qualities. Hence, this bond remains, and all those who loved the person dearly should try all the more to bring gratification to his eternal soul and continuous spiritual elevation [aliyas haneshomoh] through greater adherence to the Torah, Toras Emes [the Torah of Truth], in general, and particularly in the realm directly related to the soul’s passing – to observe what is prescribed for the period of Shiva [the seven days of mourning], but not extend it, and similarly in regard to the period of Shloshim [30 days of lessened mourning], but not beyond, and then, and always, serve G-d through the fulfillment of His Mitzvos [commandments] as such service should be – with joy and gladness of heart.